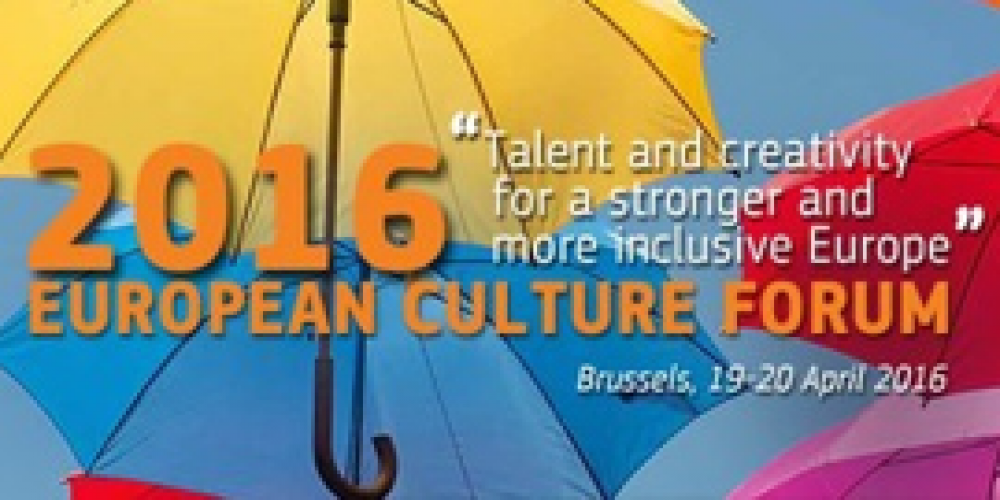 On April 19th-20th Bruxelles hosted the European Culture Forum, the biennal flagship event organised by the European Commission, this year focused on “Talent and creativity for a stronger and more inclusive Europe”. Different sessions highlighted the role of culture and creativity in society. Three plenary sessions were devoted to these topics:

Plenary Session 1: Can culture help to overcome the fragmentation of society?

Plenary Session 3: Can culture improve Europe’s standing in the world?

In addition to these, other 15 sessions, among which the n.5 concerning “Our Future European Cultural Heritage: Engage, Share, Co-create”. The importance of the participatory issue is stressed also because the sustainability of cultural heritage “depends on our ability to adopt new cross-cutting approaches to unlock its economic and social potential, turning heritage sites into drivers of economic activity, centres of knowledge, focal points of creativity, culture and social innovation”. An important edition that of 2016, also thanks to the announcement of a European Year of cultural heritage by Tibor Navracsics, EU Commissioner for education, culture, youth and sport: “I’m delighted to announce that the Commission is proposing to make 2018 the European year of cultural heritage. It will be an opportunity to promote knowledge and understanding about cultural heritage”. The final decision will be taken by the European Parliament and the Council.

Concerning the impacts of culture, in October 2015 an important report was published on the topic of “Cultural and creative spillovers in Europe: Report on a preliminary evidence review”, authored by Tom Fleming Creative Consultancy (TFCC) and commissioned by an international research partnership made up of Arts Council England (ACE), Arts Council of Ireland, European centre for creative economy (ECCE), European Cultural Foundation, European Creative Business Network e Creative England. The project aims at elaborating an international evidence library, through the analysis of 100 case studies and their spillover effects, in order to identify conditions to enable spillovers and to list related indicators. In this report, cultural and creative spillovers are defined “as the process by which activity in the arts, culture and creative industries has a subsequent broader impact on places, society or the economy through the overflow of concepts, ideas, skills, knowledge and different types of capital”. They are classified into 3 categories: knowledge, industry and network spillovers, according to the different impacts, that can be of course interrelated.

On April 5th, the European Commission launched the creation of a European Network of Creative Hubs, in order to reinforce networks of creative hubs at European level, since “by facilitating co-creation, creative hubs can help to cope with the sharing economy”.

In December 2015, the Working Group of EU Member States’ Experts on the development of the Key Competence Cultural Awareness and Expression published an important document aimed at providing policy-makers with recommendations and inspiring practices: “Cultural awareness and expression handbook”. As a matter of fact, it is one of the eight key competence identified by the European Union in 2006[1], defined as the “appreciation of the importance of the creative expression of ideas, experiences and emotions in a range of media, including music, performing arts, literature, and the visual arts”. It acquires a great importance not only with regards to appreciation and expression skills, but above all because “a solid understanding of one’s own culture and a sense of identity can provide the basis for an open attitude towards and respect for diversity of cultural expression”.

On April 2016, Europa Nostra, a European network of 250 member organizations,150 associated organizations and around 1500 individual members, delivered its annual cultural heritage Awards, in partnership with the European Commission. Besides celebrating excellence, Europa Nostra constitutes an important lobby at the European level and it is active also in the field of endangered cultural heritage and landscape. The Awards are given from 2002 in different categories: 1.Conservation, 2.Research, 3. Dedicated service by individuals or organizations, 4. Education, Training and Awareness-Raising. The fourth one rewards “outstanding initiatives related to education, training and awareness-raising in the field of tangible and/or intangible cultural heritage, to promote and/or to contribute to the sustainable development of the environment”. In 2016, the winners in this last category are:

At the European level, there is evidence of an increasing awareness of the role of culture in overall society, of how pervasive cultural spillovers are. We just need effective policies giving priority to these long-term objectives both at the national and at the local level.