post-title The City, the Commons, the Flower

The City, the Commons, the Flower 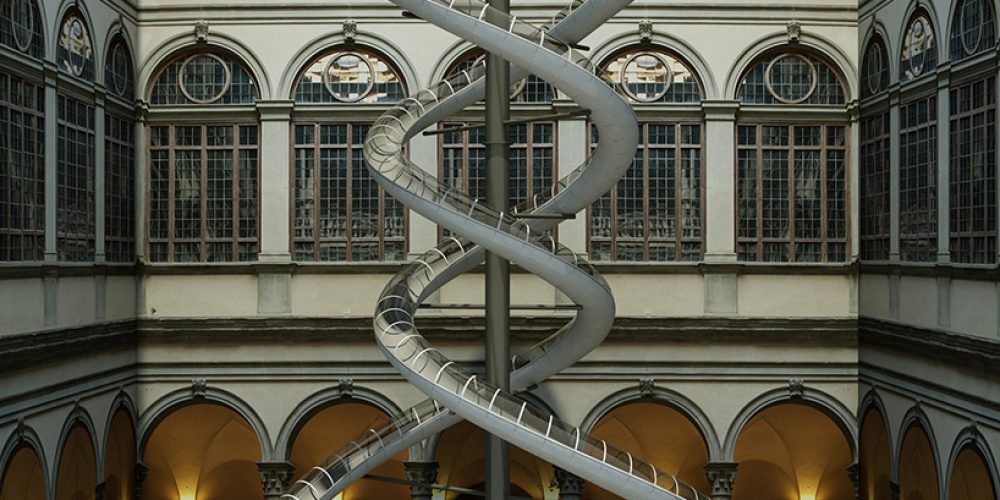 Today June 7th, a small event, highly symbolic however for all of Europe’s historic centres being turned into Disneylands for tourism, will take place in Florence, when the children of the Oltrarno district will plant forty rhizomes of iris about one hundred metres from the Brancacci Chapel, where Masaccio unwittingly unleashed the Renaissance (and also painted an extraordinary allegory of the Commons).

Whatever is bureaucratic and artificial, is easy to understand. Whatever is real is unique and complex, so it will take some explaining, but the fun lies precisely in putting the strands together.

The first strand lies just behind the Carmine church, in Florence’s Oltrarno district: a garden hidden behind a high wall called the “Nidiaci”, a gift by the American Red Cross, in 1920 to the children of what was then the poorest district of the city, riddled with TBC and crime, yet the scene of extraordinary human passions and solidarity. 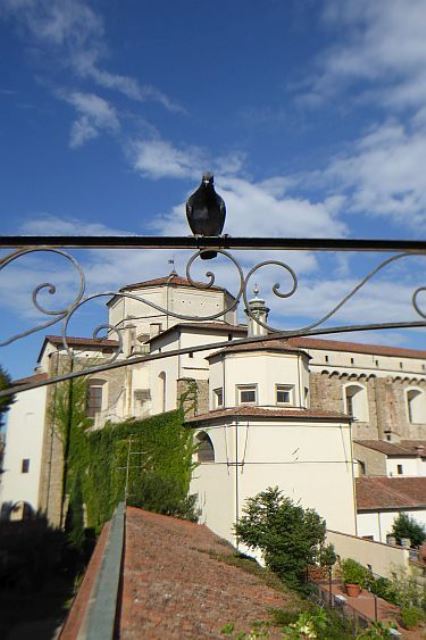 Today the inhabitants of the centre of Florence are being driven out by an Airbnb economy based on evictions, empty houses, craftsmen overwhelmed by taxes losing their workplaces to pubs.

Flats are filled by people who have no contact with the area they sleep in for a night or two, while bartenders and cooks – largely from remote parts of the world – commute every night for miles, to reach their zoned homes, leaving a trail of burnt fossil fuel behind them.

Metaphorically, we could say that a certain number of Florentines make money by gluing their ancestors’ bones to clothes hangers and putting them up in their shop windows. As an exceptionally kind hearted landowner put it to a single mother and her child before evicting them, “I’m so sorry, but if you leave, I can earn 90 euros a night from this flat!”

To make way for tourists yearning to see the “Oltrarno, district of craftsmen”, the last shoemaker was evicted too: he held out bravely for several months in his tiny shop, with no running water, before finally leaving the city.

The hidden Nidiaci garden has become a rallying point for old and new residents – Florentine carpenters and bakers alongside Macedonian hotel cleaners, Egyptian pizza cooks and Irish artists – who keep it open as a Commons: arts, music, crafts, a vegetable garden, a football school, set up by the legendary Lebowski team (the only soccer club owned by fans in Italy) and guided tours for local children, to remind them that they are the guardians of the rich history of Florence, wherever their parents may have been born. 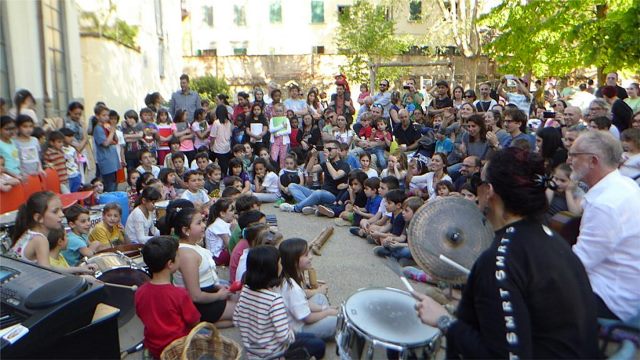 Children’s concert at the Nidiaci

The second strand concerns the name of Florence, supposedly derived from the Latin flos, “flower”: a city founded, according to legend, during the Roman festival of Floralia, an image which immediately brings to mind Flora in Botticelli’s Primavera, so beautifully thinned out in Evelyn De Morgan’s painting Flora, sold to a Scottish patron.

On the bottom right of the painting, the small tag, written in rhymed medieval Italian, says,

“I come down from Florence and am Flora,

This city takes its name from flower

I have my dwelling among the mountains of Scotia

Welcome me, and let my treasure amid northern mists be dear to you.”

The heraldic symbol of the city-state of Florence, since before Dante, has always been the fleur-de-lys, as it appears on the town banners. Here you can see it in one of those ambiguous events where true Florentines wear, with enormous commitment, authentically fake Renaissance costumes, partly to attract tourists, but mainly because they have a tremendous desire to express a deeply felt identity. 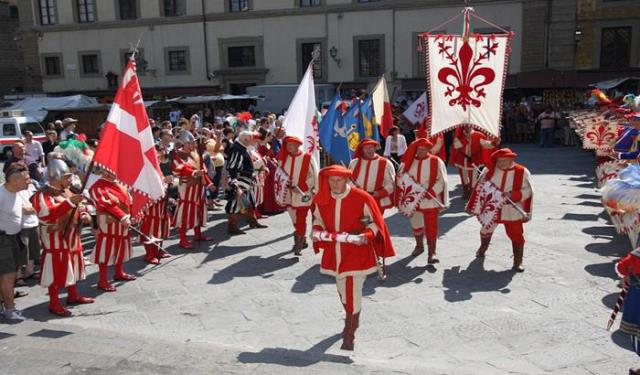 People all over Italy do similar things, like the Chivalry Joust of Sulmona, which has no spectators because nearly everybody in town is an actor and nobody knows where Sulmona is.

The fleur-de-lys of Florence is actually an iris, the humble giaggiolo which until not so many years ago used to grow everywhere along the banks of the Arno, but has now nearly disappeared. 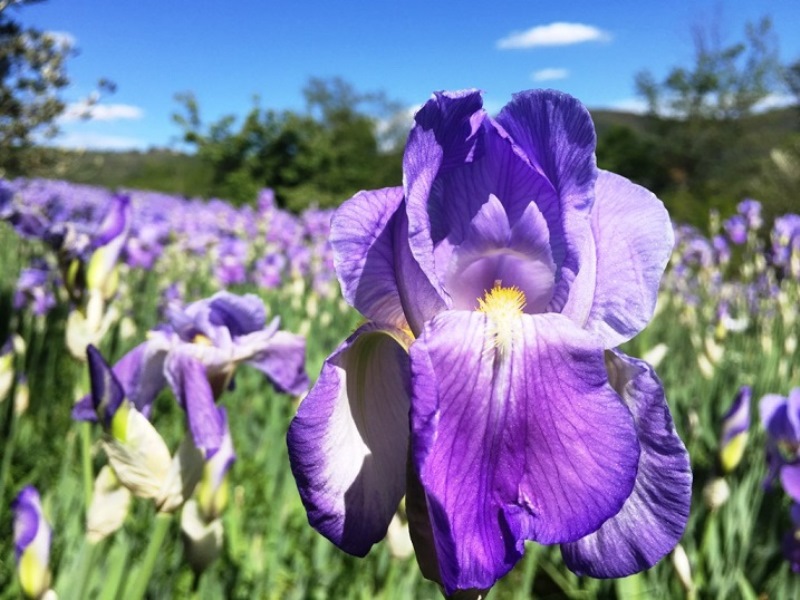 Next to Piazzale Michelangelo, where tourists enjoy a splendid view over the city, there is another little known garden, kept open only a few weeks a year by a group of enthusiasts and dedicated exclusively to the iris.

The third strand is the University of Florence, where Professor Stefano Mancuso has opened a new field of research, that of plant sensitivity, establishing the International Laboratory of Plant Neurobiology.

Mancuso is also the inventor of the fascinating and somewhat frightening Jellyfish Barge, a kind of Noah’s Ark to help us survive the Anthropocene we have created.

Right now, probably the most prominent cultural event in town is an unlikely experiment set up by Mancuso and a German artist, in the courtyard of the Renaissance Palazzo Strozzi, on the relations between plant and human psychology.

The Florence Experiment is a research project where visitors slide down a structure from a height of 20 metres; their emotional reactions will be recorded and compared with those of plants to examine the empathetic possibilities between humans and plant organisms. 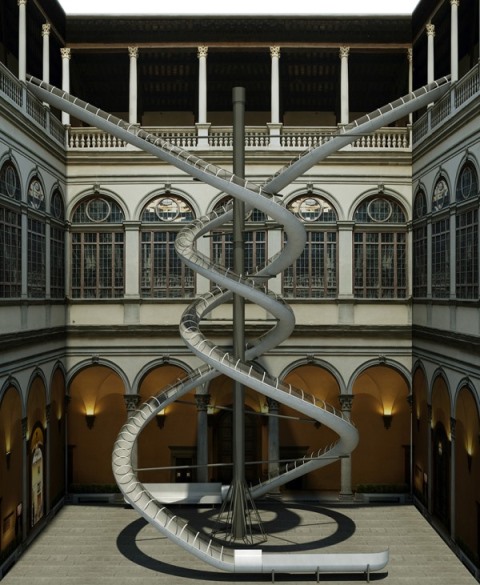 The issue of relations between plants and us, is of course enormous, quite simply because without plants, we would cease to exist; and our future therefore depends on how we relate to them.

This takes us to the fourth strand. Professor Mancuso has launched an interdisciplinary master’s degree, called “Plant Future” – Futuro Vegetale, – bringing together scholars from very different fields (biology, sociology, architecture, political science) who are seeking a way out of the suicidal course we are currently engaged in.

Then there is the fifth strand, Florence’s Calcio fiorentino, a no-holds-barred form of football developed in Florence in Renaissance times, played between the four historic districts of the old part of Florence,

Though it is a rediscovered tradition (dating back to the 1930s), it is firmly rooted in local culture, and is the strongest source of identity of the Oltrarno district, which is of the “White” colour, and where a hardy group of unpaid bar keepers, electricians and carpenters risk their lives every year for this match dedicated to Saint John, the city patron.

The official matches are a municipal institution, so fans and players have set up an independent organisation, recreating the fourteenth-century fraternity of the “Whites”, the Compagnia dei Bianchi, one of the countless lively community organisations of medieval Italy, to develop local solidarity and help the countless people whose very survival is in doubt in these hard times.

The scholars of Plant Future decided that the most symbolic place in all Florence to launch a new idea of how to found a city was the Nidiaci garden, its plants, trees and human community.

The first irises would be there, then they would be gradually planted wherever people took care of community gardens.

So they went to the Iris Garden, where the organisers immediately understood, and gave forty of their best rhizomes, kept for international competitions, to plant in the Nidiaci, recreating the original Florentia or flowering.

The minute beginning of a renewal of a whole city, based on commoning.

The Plant Future scholars came over to visit the garden.

An Albanian mother, who sells shirts in the market at San Lorenzo and teaches the children how to grow tomatoes and melons in the Nidiaci garden, decided where the rhizomes should be planted.

Then the organisers got in touch with the Compagnia dei Bianchi, because it was fundamental for them to be present in such a special moment.

All of this is very small, and very concentrated.

And smallness, and concentration, is exactly what we all need.

As Rising Appalachia put it,

Stand up, look around and then scale that down too!”