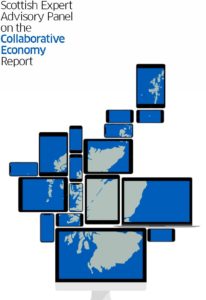 The Scottish Expert Advisory Panel conceived in April 2017, has surely contributed to accumulate food for thought around new issues concerning the Collaborative Economy. The Scottish Government issued its response to the Panel’s report in July 2018.

The purposive character of the said Panel was to provide advice and technical expertise to the on-going policy development on the collaborative economy; its programmatic nature instead, envisioned a series of recommendations addressed to the Scottish Government. The latter’s response, published in the July report, seems nevertheless to be perfectly aligned with the Panel’s recommendations and inclinations.

According to the Government, the collaborative economy undeniably constitutes a powerful tool to connect individuals and communities through online platforms and allowing goods and services to be shared without the need for ownership. Its huge potential is said to contribute to a fairer and more socially responsible economy for Scotland, supporting a responsive and agile regulatory environment with a focus on platforms that deliver fair work while contributing to inclusive growth.

The focus on Scotland’s role in the digital economy for instance, has resulted in the coming into being of public-private partnerships projects, such as Digital Tourism Scotland. As a matter of fact, the so-called “visitor economy” contributes significantly to a country’s growth. Major concerns have been devolved to transport infrastructures, cultural heritage and recreational opportunities.

Additionally, the Panel underlined the growing importance of social or collaborative finance, such as crowdfunding. The latter is considered to be an emerging source of finance that involves open calls to the public to finance projects or platforms. Usually, we distinguish between two types of support: reward based crowdfunding and donation based crowdfunding. The benefits of crowdfunding are multiple: its inclusiveness, its flexibility and its scope.

Diverse and new economic models are fundamental for a de facto community-led urban development; the following topic has been explored during the conference Funding the Cooperative City held in Rome during the month of May. Here, local and international speakers discussed and shared their innovative collaborative methodologies, between environmental sustainability, collaborative governance and social economy.

The Scottish Government underlines then the launch of ShareLab Scotland as a pilot innovative and collaborative platform. Progresses have been made in the energy sector where crowdfunding has been employed to support community owned renewable energy.

Similarly, a workshop of the local support group of the Urbact Network Urbinclusion recognized the need to develop new economic models applied to public-private partnerships to foster community welfare, under the flag of three imperatives: regulation, responsibility and governance.

In conclusion, the Scottish Government’s efforts will try to respond to the growing imperatives underlined by the Panel in order to create a fairer and more equal Scotland centred on a sustainable and inclusive economic growth.