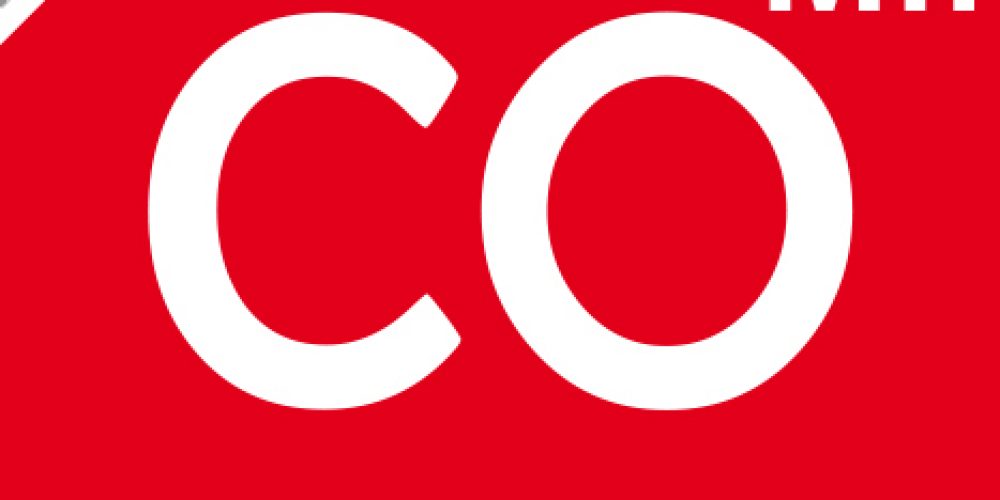 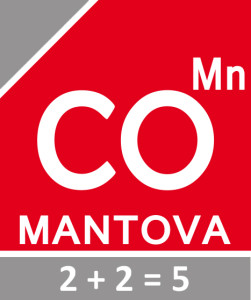 CO-Mantova builds on the experience developed by LabGov through the “City as a Commons“ project and the “Regolamento sulla collaborazione per i beni comuni urbani” (i.e. Regulation on collaboration for Urban Commons which greatly benefited from Sheila Foster’s work on urban commons) that LabGov contributed to draft for the City of Bologna at the end of that project.

An innovative institutional paradigm recognized by the Italian constitution which establishes the principle of horizontal subsidiarity in article 118, paragraph 4. According to such principle citizens, civil society, the community at large have the right and the freedom to take care of the general interest by improving and defending the commons together with all level of government

The project is supported by the local Chamber of Commerce, the City, the Province, local NGOs, young entrepreneurs, SMEs, and knowledge institutions, such as the Mantua University Foundation, and some very forward-looking local schools.

The connubial tie between collective management of the commons and horizontal subsidiarity characterizing the approach adopted in the Mantova Lab is a powerful engine for economic and social development. There are many examples around the world and in Italy demonstrating the success of cooperation among government and communities, public administrations and citizens, local businesses and volunteers.

Chocolate factory is the name of a cultural district in a run-down area of London, one of the most active cultural space of Europe.

The Spazio Grisù is the first creative factory in Emilia Romagna that now houses the headquarters of many cultural enterprises. The OGR (Officine Grandi Riparazioni) project in Turin was born in the city old industrial area, that has been renovated and donated to the community in order to carry out cultural and artistic projects. Some projects are born from patronage: the gift of private entities that subsequently open to the public and public administration. An example is the Favara Farm Cultural Park in Sicily, which was born in a middle degraded and at risk delinquency. Favara has become one of the most important area for contemporary art in the world. These assets recovered have become theaters and meeting places of the projects and initiatives from the artistic talent related to the international art community .Businesses have a key role in this process of artistic development, in particular about creation of creative. Businesses are the leverage to create new relationships, collaborations and partnerships. The  cultural incubator  is the meeting place for small businesses and nascent cultural expertise of large corporations, which to provide assistance advice and contacts through their services, especially for newcomers, with the goal of creating a multidimensional system.

The first step was “seeding social innovation” through a collaborative call for ideas “Culture as a Commons” to bring forth social innovators in Mantova, promoted by the Province of Mantova, which identified 7 main projects by young people under the age of 29 years, on the collective, shared management of cultural commons. In Mantova culture and cultural heritage, both as a material and immaterial commons, is considered the cornerstone on which to build a local alliance among all local actors willing to interpret “culture as a commons” and as a driving force for a community-led commons-oriented new development paradigm for the territory of Mantova. The final outcome is to revitalize the cultural heritage of the territory of Mantova by harnessing social innovation, creativity and digitalization.

Second step was the co-design laboratory “Entrepreneurs for the Commons,” promoted by the “Cooperatives and Civil Economy Entrepreneurs Group” – established within the Chamber of Commerce of Mantova, an ideas camp where the seven projects from the call were cultivated and synergies created between projects and with the city. The Lab approach is based on involving directly the actors of the project with the co-design and co-working method. The Mantova Lab’s goal is the development of innovative solutions for the shared management of cultural commons, supported by the use of ICT. The digitalization of cultural heritage is crucial for the development of cultural economy. The fab labs are the incubators of the third industrial revolution, training for social innovation. The Laboratory applies the method of co-design, participatory design, collaborative communication and aims at prototyping and testing practices of shared care of cultural commons (i.e. project activities require testing of a living lab and Fab Lab, the creation of an incubator for cultural and creative enterprises and cooperative placemaking) aiming at promoting the cooperation and collaboration among civil society, co-operatives, local enterprises and businesses and public institutions in the care and regeneration of the common cultural heritage of Mantova can be cultivated, improved and finally become the engine of a “collaborative cultural and creative community interest enterprise”. According to the project, local businesses and entrepreneurs play an essential role (also considering corporate social responsibility influence) in the shared management of cultural commons, functioning as an intersection point among public administration, non-profit sector and citizens, following the idea of sharing resources and competences of each one to reach a common aim. 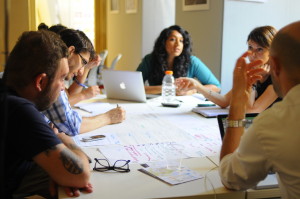 The first leg of the collaborative camp was held on June, 19th and 20th, with Prof. Gregorio Arena and Prof. Christian Iaione speaking about the principle of subsidiarity and the governance of commons. On July, 9th and 10th the participants to the Lab have worked with Daniela Selloni focusing on the interactive storyboard, prototype, and the co-design of services. On July, 16th and 17th the Lab has hosted Anna Seravalli for a co-working session dedicated to participatory design for the commons. Finally, before the summer break, the Mantova Lab has worked with Dino Amenduni on communicating the main idea which is to create a collaborative cultural and creative community-interest enterprise. After the summer break the Mantova Lab saw the participation of Daniele Di Gennaro as an expert in cultural and creative industries, and Luigi Corvo, as an expert in fundraising and sustainability.

The next step is the fourth and final phase: the governance testing and modeling through the launch of a public consultation in the city on the text of the Pact and a roadshow generating interest in CO-Mantova among possible signatories belonging to the five categories of collaborative governance actors. We are also may have CO-Mantova opening up a Commons School.

The code of the Pact

The CO-Mantova Collaborative Governance Pact provides a code of definitions, values and principles:

Definitions contemplated by the Pact are among other:

– Commons: Commons are goods, tangible, intangible and digital, that citizens and the Administration, also through participative and deliberative procedures, recognize to be functional to the individual and collective wellbeing, activating themselves towards them pursuant to article 118, par. 4, of the Italian Constitution, to share the responsibility with the Administration to cure or regenerate them in order to improve their public use[1]

Values and principles of the Pact are:

–       Mutual trust: based on the public prerogatives regarding supervision, planning and control, the Administration and the active citizens shape their relationships to the mutual trust and they presuppose that the respective will of collaboration is oriented to the pursuit of purposes of general interest;

–       Publicity and transparency: the Administration guarantees the largest knowledge of the partnership opportunities, of the proposals received, of the forms of aid assigned, of the decisions taken, of the results and of the valuations made. It recognizes in the transparency the main tool to ensure fairness in the relationship with the active citizens and verifiability of the actions made and the results obtained;

–       Responsibility: the Administration values its responsibility and the citizens’ responsibility as a key factor in the relationship with the citizens, as well as a necessary prerequisite in order  for the partnership to be effectively oriented to the production of useful and measurable outcomes;

–       Inclusiveness and openness: the interventions of care and regeneration of the commons must be organized in order to allow any interested citizens  to join the activities at any time;

–       Sustainability: the Administration, in the exercise of discretion in making decisions, verifies that the collaboration with citizens does not cause greater costs than benefits, and that it does not determine negative consequences on the environmental equilibrium

–       Proportionality: the Administration ensure that the administrative requirements, the guarantees and the quality standards required for the proposal, the preliminary investigation and the execution of the collaborative interventions, are commensurate with the real needs of protection of the public interests involved;

–       Adequacy and differentiation: the forms of collaboration among citizens and the Administration are adequate to the needs of care and regeneration of the urban commons  and they are differentiated depending on the type or on the nature of the urban common and on the people whose well-being it is functional to;

–       Informality: the Administration demands that the partnership with the citizens takes place in accordance with the requested formalities only when it is provided for by law. In the rest of the cases it ensures flexibility and simplicity in the relationship, as long as it is possible to guarantee the respect of the public ethic, as it is regulated by the code of conduct of the public sector employees, and the respect of the principles of impartiality, efficiency, transparency and judicial certainty;

–       Local democracy: the pact guarantees equality between parties and subscribers and the attribution of reciprocal rights and duties. The pact pursues the improvement of the quality of local democracy;

–       Public autonomy: the pact signatories act as “public actors”, holding the ability to take care of the general interest;

–       Horizontal subsidiarity: the pact was made possible thanks to the participation of all the parties, which got activated in a collaborative and mutually supportive way, even delegating specific functions if acquitted by others more effectively, in the pursuit of the common good. According to this principle the care of collective needs and the activities of general interest are provided directly by private citizens (both as individuals and as members) and the entities involved in ‘subsidiary’ function, programming, coordinating and possibly managing;

–       Legality: the compliance with the principles and rules dictated or accepted in the legal system is the cornerstone on which the entry and stay in the pact is based. The law is intended not only as a means of guarantee for civil coexistence within and outside of the pact, but also as a fundamental tool of cultivation of social cohesion and competitiveness of the territory. 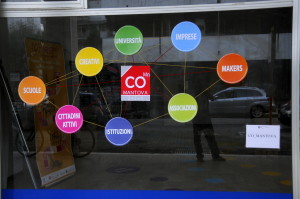 Another outputs of the co-design process that led to the creation of CO-Mantova is the sustainability plan, realized in order to ensure to the platform Co-Mantova a long-term financial and economic sustainability. From a first analysis of data we can say that even the Mantua area is affected by the same peculiarities of the Italian system, in the presence of a high number of SMEs, but unlike the Italian trend, these SMEs, account for a larger proportion of working population. On the one hand, this could make it more vulnerable to the business system of Mantua, because the population involved in the instability of these companies is representative of a greater number of people than the national average. On the other hand this morphology of the business system is a feature that could be maximized through networking and collaboration tools, such as the initiative to CO-Mantova aims to do.

The last outcome springing out of co-design process that led to the creation of CO-Mantova is the communication Plan. CO-Mantova.it website is the centerpiece. So is the public consultation process we launched on the whole CO-Mantova process/pact and all other initiatives on the ground and through traditional and social media that CO-Mantova has carried out so far and will be carrying out in the next future.