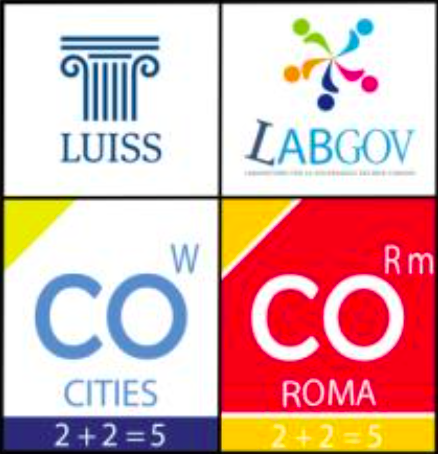 CO-Roma is a project developed by LabGov in collaboration with the Italian renewable energy research agency ENEA, the architecture firm Alvisi Kirimoto and several other partners in the Roman area, with the aim of designing and experimenting a co-governance strategy that could allow to conceive the Roman city and territory as common goods. Such strategy is based on the principles outlined in the Co-city Protocol, a methodological framework resulting from theoretical and applied research on urban co-governance, based on experimentation processes developed in different Italian cities.

Knowing: This phase connects through a series of cheap talks (informal discussions) on the commons the first information on the commons present in the area and those on the actors that could be involved, while cooperation is stimulated through the informal setting.

Mapping: The second phase involves both analogue and digital mapping of the resources and of the actors. This double mapping effort allows to realize fieldwork observation while also working at the creation of a collaborative digital platform. This phase is important as it highlights limits and weaknesses of the sites proposed for the experimentation process during the cheap talks.

Practicing: The practicing phase has the objective of co-designing and realizing a series of civic collaboration micro-interventions, characterized by low cost and low commitment requirements for the actors involved. Such actions allow to build trust between the community and the team working on the co-governance of the commons.

Prototyping: In the prototyping phase the community composed by different local stakeholders that has been previously located is involved in a co-design process, requiring a deeper level of commitment. In this phase the community reflects on its needs and desires, defines a common objective and begins to imagine the following concrete actions.

Modeling: Modeling is the last phase of the process that can happen once the critical features and characteristics has been addressed and the governance device prototyped has been tested and eventually improved. 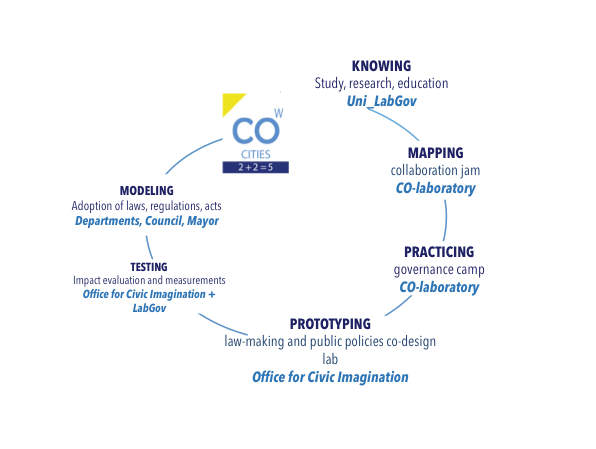 During the academic year 2015/2016 LabGov, through a process that involved university students, local associations, institutions, entrepreneurs and professionals, conducted an experimentation of the CO-city protocol, applying the first four phases (knowing, mapping, practicing, prototyping) in the city of Rome.

In a first phase a series of preparatory meetings and discussion took place, involving scholars, practitioners, experts and activist working on urban co-governance and representatives of collaborative communities active on the Roman territory. A mapping phase followed, consisting in activities of both analogue and digital mapping. Therefore, on-the-field explorations and dialogues with local actors were conducted alongside with the development of a digital platform (the CO-Roma platform) allowing for a collaborative and open discovery of the territory. The mapping phase allowed to locate different fields which could be suitable for the activation of an experimental process, and to further test the suitability of these areas a series of micro-experimentations were developed on the ground. The knowing, mapping and practicing processes brought to the identification of the Fifth District (V Municipio) as the most suitable city area to experiment with urban co-governance. In particular, the choice to focus on Centocelle’s Archaeological Park allowed to experiment on the collaborative governance of a resource which holds a high cultural value, both as a urban commons, a green commons, an archaeological site and as cultural heritage (as defined by the Faro Convention). Centocelle’s Park presents peculiar characteristics, which make it particularly suitable for a participatory and collaborative governance process: the neighborhood in fact, while facing a series of critical issues on which it is important to work, involving environmental, mobility, cultural, and social issues, is at the same time characterized by the presence of different actors that have the potential to become commons’ activators.

Having identified the experimentation site, the project entered in the following prototyping phase, and a co-design process was then activated. Objective of the prototyping phase was the creation of a local working group, collaboratively managed, committed to working together for the regeneration of the Park. During this phase, through several workshops it was possible to locate and bring together all the relevant stakeholders and to collectively define the future actions for the recovery of the Archeological Park. Using co-design techniques and instruments, the workshops guided the community in a complex process which, starting from self-reflection and from the identification of the group’s strengths and objectives and of the community needs, allowed for the identification of priorities and of possible future actions. The co-design path led to the creation of a community (Comunità per il parco Pubblico di Centocelle) dedicated to the care and regeneration of the area. The detailed reports of the workshops can be found here. Since its creation the community has promoted several actions, ranging from the opening of passages for pedestrians to the planting of trees, with the aim of making the park more accessible and livable, while at the same time creating the basis for further collaboration within the community and outside of it, with the local stakeholders and the municipality. It is possible to find out more about the activities organized around the Archaeological Park and to be updated on the future steps on the community’s blog.